Home
katakana
Japanese Lesson! You should learn from katakana.

Here you can take Japanese lessons that are a little different from others. We don’t do anything difficult. But by the time you finish all the lessons here, your fear of Japanese will disappear.

You may be bored at first, but we’ll aim to complete Lesson 1 first!

2. Learn the structure of Japanese sentences.

The Japanese language is composed of four types of characters: hiragana, katakana, kanji, and romaji, and a single sentence may contain a mixture of all four.

This sentence contains all hiragana, katakana, kanji, and romaji. Let’s check it out in the figure below.

I think it looks like a symbol that doesn’t make sense now, but it’s okay. By the end of this lesson, you will surely be able to tell them apart.

There is no need to understand the details here. Please go ahead for now.

Let us look at each of the four types of letters.

Hiragana is the first character that Japanese children learn at the age of six. The basic characters are 46 and are memorized using the chart below. 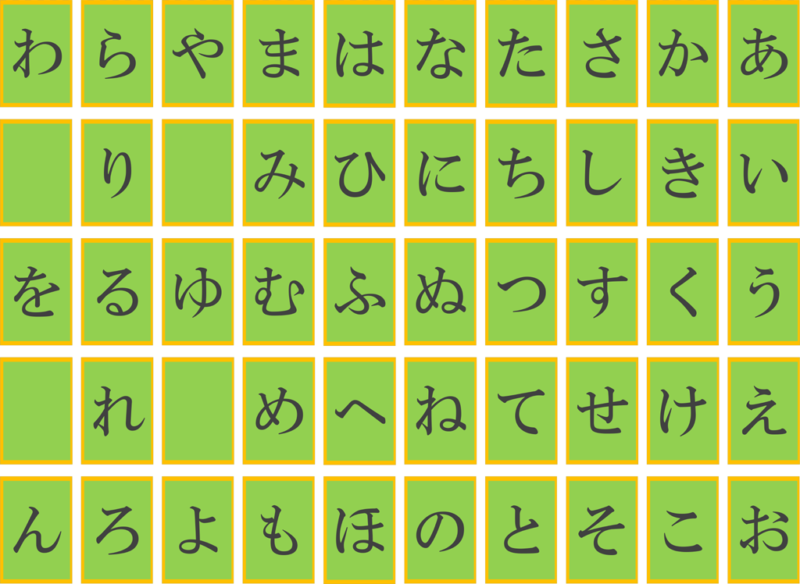 Hiragana is a syllabic script in which each character has a unique pronunciation.

Hiragana is like a phonetic symbol in Japanese, so each letter does not have much meaning. It is similar to ABC in English.

Hiragana is the most basic of the four types of characters. All Japanese can be written using only hiragana.

In fact, children who have not yet learned kanji write entire sentences using only hiragana.

Now let’s compare it with a sentence written entirely in hiragana.

The first line is a sentence written entirely in hiragana. These two sentences have exactly the same meaning and reading.

Japanese sentences do not have spaces between words.

If everything is written in hiragana, the delimitation becomes unclear and the true meaning may not be conveyed.

Therefore, different types of characters are used depending on the meaning of the words to make them easier to read.

There are many foreign words in Japan that are used as they are without being converted into Japanese.

Katakana is mainly used for these foreign words.

Katakana is the second character that Japanese children learn after hiragana at the age of six. Like hiragana, is a Japanese syllabic character.

The basic 46 characters also have exactly the same pronunciation and exist one-to-one with hiragana, and are memorized using the table below. 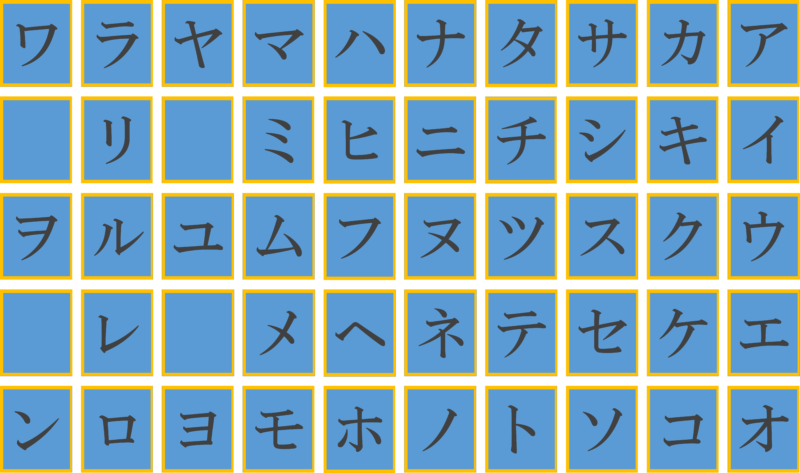 Since katakana exists one-to-one with hiragana, all hiragana can be rewritten into katakana.

In other words, although I wrote earlier that all Japanese can be written in hiragana alone, it can also be written in katakana alone.

Characters in the same position in the hiragana table and katakana table are pronounced exactly the same.

Let’s compare the previous sentence with a sentence written in hiragana and katakana.

Although they look different, all three sentences have exactly the same meaning and reading.

While hiragana and katakana are syllabic characters like phonetic symbols, kanji are symbolic characters.

A Japanese child learns the following 80 kanji during the course of a year between the ages of 6 and 7.

Each kanji has a meaning and is pronounced by collecting several hiragana.

All the kanji below can be rewritten in hiragana. 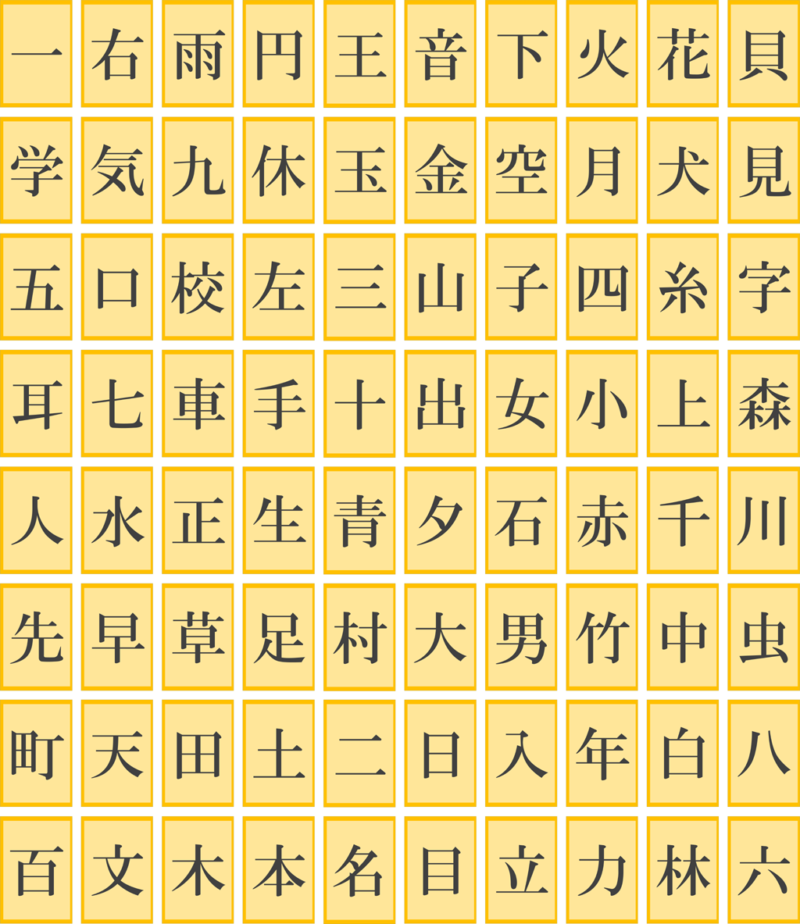 Kanji learned at age 6 are easy characters that can be written with a relatively small number of strokes and are mainly hieroglyphs, so they are sometimes learned together with pictures.

The 80 kanji above are easy kanji, but they are used as part of complex kanji.

We will explain more about Kanji characters another time.

Romaji is written using the English alphabet as it is.

It is used primarily for names of Japanese places, Japanese people, and companies.

Like katakana, romaji is also a combination of alphabets and exists one-to-one with hiragana.

Characters that are in the same position in the hiragana table and the romaji table are pronounced exactly the same. 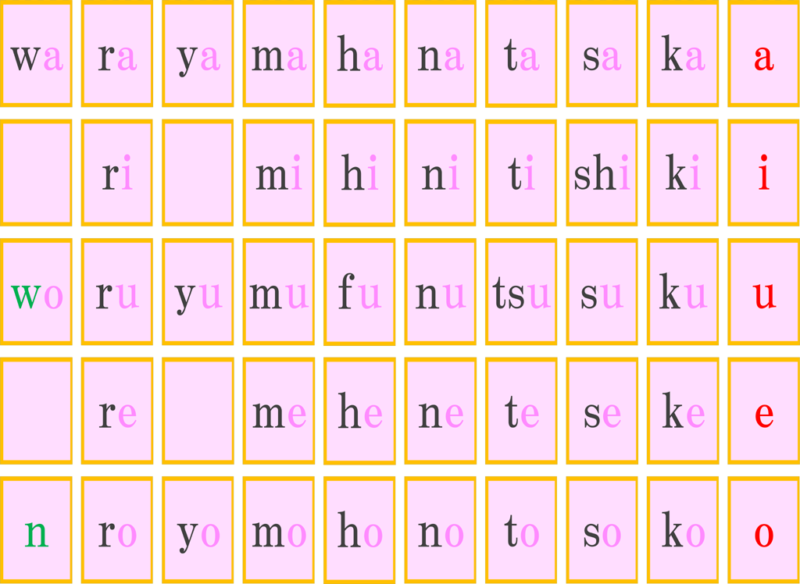 Here are some examples written in Roman characters.

Japanese keyboards have hiragana written on each key, and hiragana can be input directly, but most Japanese input romaji, then convert it to hiragana, katakana, or kanji.

As I mentioned a little above, Since romaji is one-to-one with hiragana pronunciation, all converted characters will have the same reading.

There are various other rules for writing roman characters in addition to the above table, but we will explain them at another time.